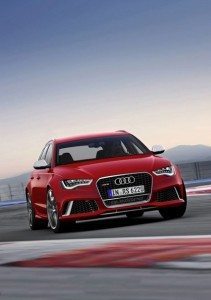 better. There are a ton of automotive companies that have been producing vehicles of all shapes, and sizes for decades now, and they find ways to out do themselves every year. This is year automaker Audi has set their proverbial “Bar” extremely high with their latest model.

The 2014 Audi RS6 Avant is a car like no other. For most of us Petrol-heads out there in the world, we can always appreciate a great looking car when we see one, and this new Avant is not just a new car, it’s an illegal gathering of technology, science, power, and sex appeal. (That’s putting it mildly)

First off, the 2014 RS6 Avant has some powerful numbers backing up it’s well known menacing good looks. We’ll get to the exterior in a second, let’s peek under the bonnet first. This new model simply oozes with power, 417kW to be exact. Here’s another number for you, 700Nm. Just let it resonate in the back you head for second or two. (I’ll wait.) Yes, 700Nm is the range of the ever so mighty Corvette ZR. So if you really look at this car, you will realized that it has more power than some sports car, and has the space of a wagon. All of the insane power, and torque numbers are produced by a moderately sized 4.0L Twin Turbo Charged V8 motor, that when tested launches this car to 100km/h in just 3.9 seconds, and the top speed is limited to 305km/h. Majority of the 700Nm will constantly be felt while driving in the 1,750 through 5,600 rpm range. 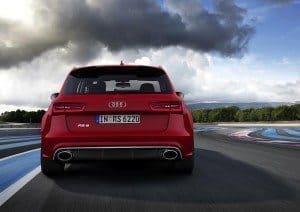 Now that we’ve briefly discussed what kind of beastly power this car has, we turn to the aesthetics of the 2014 Avant. Up front we see that Audi has been finding ways to widen the openings of the lower bumper to increase air flow, as well make every single model just that much more menacing. As you move from front to the rear of the car, those classic Audi lines tend expose themselves as small points in history, dictating how the past has made its presence in the future. Slightly elongated wheel arches house some of Audi’s greatest looking wheels to date. A set of standard 20” Forged twin 7 spoke wheels keep people staring at this car as it drives by them.

The interior of the 2014 Audi Avant is something that you would find in a store that sold custom leather jackets, and then they wrapped the entire cabin of your car in the same leather. The cross stitched pattern, and the bolstered seats just entice the senses into oblivion. The combination of leather, and Alcantara that has found it’s way all around the cabin, is simply ridiculous. Audi has out done themselves on this one.

In keeping with the interior, we find some top notch electronics that currently reside inside 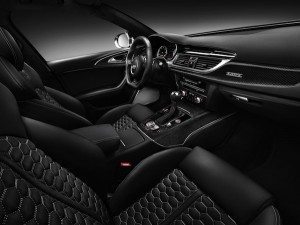 of the 2014 RS6 Avant. Firstly, we have a Bang & Olufsen 1,200 watt, 15 speaker sound system that makes every sound that you hear, feel like you have front seats at the Sydney Opera House. Also entangled with the sound department is the Blutooth, external audio inputs, Audi online phone service, Sat-Nav with live up to date sonar services, and a heads up display that gives the driver all the information that he/she would require whilst driving down the road. Also, Audi has upgraded safety by adding front & rear impact detectors, full curtain airbags, lane departure warning, and many more things I can mention in this article. 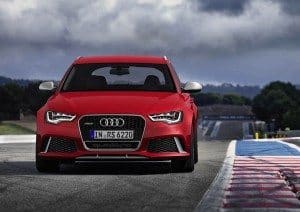 As it stands now, the 2014 Audi RS6 Avant is a beast of car that begs to be driven, and driven hard. It’s overall power and performance factor is well above the likes of Mercedes Benz, and BMW estate cars. Audi made this car to prove that estate cars can be as fast as their slightly smaller siblings. Why not drive a wagon that can go toe to toe with your neighbors sports car, and then still bring home the groceries, the kids, the dry cleaning, and so on. You get my point. Currently no pricing is available, but not matter what it costs, it will be worth every cent you drop into it.