The Toyota Land Cruiser has the longest and, arguably, the richest history in Toyota’s vehicle lineup. Early developments of the model began in 1951, as part of Toyota’s efforts to produce military vehicles for the National Police Reserve Forces (now known as the Japan Self-Defense Forces) during the Korean War.

At the time, the United States Military’s Jeep was one of the most popular vehicle models in Japan – eventually becoming the epitome of the 4×4. Because of this, the first prototype of the Land Cruiser was nicknamed the Toyota BJ, with “B” referring to the B-type engine of the vehicle, and “J” for Jeep. It is also called the Toyota Jeep BJ. This was Toyota’s first 4×4 utility vehicle.

Despite the Toyota BJ being more powerful than the Chrysler Jeep, the National Police Reserve Forces did not buy it – opting instead for the American Willys military jeep.

But, as you can tell from the Land Cruiser’s modern-day popularity, the story didn’t end here. Later in 1951, the Toyota BJ performed extremely well in a test drive where it reached up to the No. 6 checkpoint of Mount Fuji. This was the first vehicle in Japan to climb that high. Because of this, the National Police Agency was impressed, ordering 289 units, making it their official patrol vehicle.

After two years, the Toyota Jeep BJ was ready for full-scale production, and other organizations such as the Forestry and Agricultural Agency and utility companies had ordered their own Toyota BJs for professional use.

However, this sudden popularity had a drawback – the name “Jeep” was already taken, and Toyota did not want to risk trademark violations. This led the Director of Technology, Hanji Umehara, to rename it the Land Cruiser. Since then, the name “Land Cruiser” has become associated with reliability, utility, and adventure.

The Toyota Land Cruiser: A Popular Choice All Over the World

Because of its use as a utility vehicle for commercial and government work, the Land Cruiser’s popularity soon spread outside Japan. The first exported models were the Land Cruiser 20 series, most of which went to Brazil, Australia, and Saudi Arabia. The Land Cruiser was, and still is, designed to be a good match for the tough terrain and extreme weather in these countries. In fact, many varieties of the 20 series were released, with each one fitting the terrain and other specific needs of their destination country.

But what is it that makes the Toyota Land Cruiser so popular? Aren’t there similar cars that can do the same thing?

When I got to test drive the latest Land Cruiser model in the Middle East, I quickly understood what the earliest Land Cruiser drivers loved about this machine. The first thing you’ll notice is the power. The Land Cruiser is clearly meant as a tough utility vehicle. It’s fast, and can easily tow and carry bulky equipment, several people, and other heavy loads. This was especially true with Toyota’s station wagon varieties of the Land Cruiser, such as the Model 55 series, the 80 series, the 100 series and the most recent Land Cruiser 200. You can really feel the Land Cruiser’s power when you’re carrying heavy loads off-road. No cargo seems too heavy, and no path feels too rough. You get a practical experience of what the “cruise” in “Land Cruiser” actually feels like.

Apart from the power, the Land Cruiser’s 4-wheel drive makes it extremely easy to maneuver in difficult terrain. As I was driving the Land Cruiser through sand dunes and clouds of dust, I never felt that I lost control, even with the poor visibility from the dust clouds and the soft, malleable sand under the tires. It doesn’t matter if you’re off-roading in the desert, splashing around mud in the rain forest, or plowing through the snow – the Land Cruiser can easily handle it.

Finally, it’s a sturdy heavy-duty vehicle. Apart from easily managing rough terrain, the Land Cruiser can also withstand heavy driving in this environment. There’s no need to worry about wear and tear from obstacles and foreign elements. The Land Cruiser is built to last in the toughest conditions, even if the latest Model 200 series looks lighter and sleeker than its predecessors.

The above three benefits show why it’s no surprise that the Land Cruiser is the vehicle of choice for businesses, individuals, and government agencies working in tough operating environments. 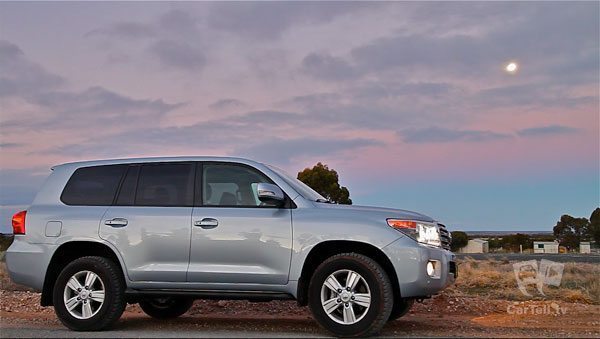 Over the years we have seen many competitors who are nipping at the heals of the Land Cruiser, such as the Range Rover, Mitsubishi Pajero, and the Nissan Patrol all offering different yet increasingly formidable alternatives to the Land Cruiser. The latest model of the Nissan Patrol is due to arrive in Australia within the coming months. I had an opportunity to drive in one whilst in the Emirates earlier this year. From the jet lagged few minutes I spent inside, the Patrol seems to offer a bundle of new creature comforts but as for its off-roading capabilities we look forward to putting it to the test as soon as it arrives on Australian shores.